Violence no longer a private matter in Zambia 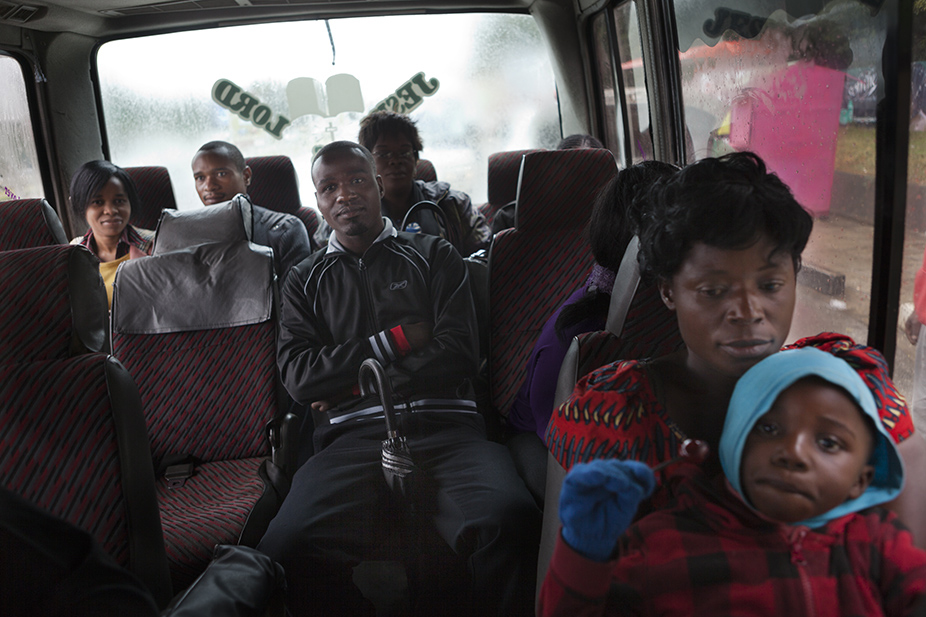 Half of Zambia’s female population will be exposed to physical violence, one-fifth to sexual violence, during their lifetime. In the early 2000s, the Zambian women’s movement began to mobilize, and in 2011 a new act against gender-based violence was passed. Now, large parts of society are working to change structures and the attitudes of men who abuse women.

The scar on Simon Dhaka’s cheek reflects the dim light seeping through the thick velvet curtain. He looks like a person you wouldn´t want to meet in a dark alley.  And he used to be.

“Few men in this country can say they have never used violence against a woman,” he says.

The men gathered in Francis Mbulouma’s small living room in Linda township are all part of the YWCA men’s network. They have all been abusing the women in their lives: physically, mentally and financially. Today they are Champions, leaders of men´s groups, each group consisting of 20 men and 20 boys. The projects they are involved with are ‘I care for her’ and ‘The good husband campaign’.

“We approach men and boys whom we know to be violent and we work with them to change their attitudes,” says Francis Mbulouma.

Linda township is a notorious area just south of the capital Lusaka. According to Francis Mbulouma, a few years ago, more than 20 women in the township lost their lives at the hands of people close to them, every year. Today, about five deaths are reported per year.

The men’s groups gather in workshops and around campfires, where the members discuss the consequences of violence and the structures that lie behind. They also act as a link between the police and the residents. They interfere. When they are alerted to households where there are problems, they first try counselling. If that doesn’t help, they report the perpetrator to the police.

When the men and boys have grasped the issues, and transformed, from caterpillar to butterfly as Francis Mbulouma puts it, they become Champions themselves and create new groups. Like ripples on water.

“Change pleases the one who changes, first”, says Simon Dhaka and the other men in the room nod in agreement.

“I feel a great sense of relief, it’s like I have won a prize”, he continues on his new life as a ‘good husband’.

Like most people working with GBV in the country, they say violence and power exercised by men against women are seen as signs of masculinity and love in Zambia.

“We did not know it was a serious thing,” says Francis Mbulouma.

“I’ll tell you how it was for me. It is a sad story. My wife could not say anything to me without me beating her. I went out drinking with my friends and when I got home I would hit her because there was no food on the table. Yet, I had not left her any money to buy food for.”

When Francis Mbulouma came home, the rest of the family would run and hide. The turning point came one day when his eldest son said he was going to beat his new-born sister. “Like dad hit mum yesterday.”

“I did not understand that the violence affected the whole family. It does not end with the man and the woman, it trickles down on the children and on the society as a whole. No one can develop in such an environment.”

Today things are different in the little brick house in Linda. From outside the courtyard Francis Mbulouma’s children call for ‘daddy’, without fear. His wife Elizabeth has been studying and now works in a hotel while Francis is responsible for the children, the four biological ones and the six orphaned nephews ​​living with the family.

YWCA is just one of the organizations working to realize the vision of a Zambia free of abuse. With the new gender-based violence (GBV) act of 2011, they have been given sharper tools. The law is extensive. It criminalizes all forms of gender-based violence: physical, psychological, economic and sexual. It also prohibits harmful traditional practices such as child marriages, female circumcision and virginity control.

There is a strong mobilization in the country. Authorities and organizations work in different ways to implement the act. In particular, like the YWCA men’s groups, they work with sensitization. Changing the attitude of both women and men in all layers of society, amongst the police, politicians and traditional leaders.

Lack of knowledge, tradition and patriarchal structures are often the root causes of violence. But the biggest obstacle when it comes to the application of the new act is the women’s financial dependency on the men. In most Zambian households, it is still the man who provides for the family. Reporting your husband on abuse is not always a viable option if you want to be able to put food on the table.
Several organizations work towards enabling women to get out of destructive relationships, without risking the financial security of their family. Women for Change is one of them. The organization works at strengthening women’s rights to financial resources.

“We focus on rural areas and on giving women control over the land they use. It is mainly women who work in the fields but they do not own the land, the male family members do”, says Barnabas Chitalu, program coordinator.

“We work a lot with traditional leaders, who are responsible for distributing land rights in Zambia. We try to make them see the benefits of giving power over the land to women instead of their husbands”, he continues.

It has proven to be an economic advantage, not only for the individual woman but for the whole district, when women gain control over land and other financial resources. They tend to take actions that benefit the whole community, not only their own family. Other organizations work with vocational training, micro financing and other means to financially strengthen women and girls. 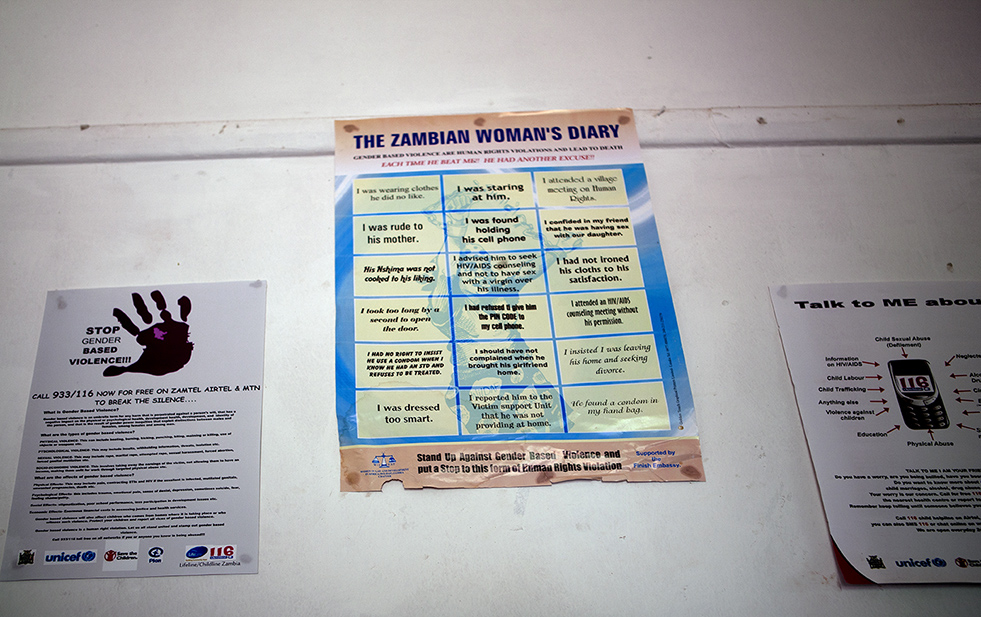 Only 18 percent of Zambian members of parliament are women, but something is happening. The country’s chief of police is a woman. In a class of recently graduated fire-fighters, one fifth were women, there are female miners and female surgeons. They earn their own money. And become role models.

Precious has taken refuge in a closet, there are no windows to escape through and soon her husband will have managed to kick the door in. Precious calls her sister in desperation as the police won’t listen, but the sister is on a minibus on her way to work and cannot do anything to help.

A man sitting behind the sister on the bus has overheard the conversation. He tries to persuades the rest of the passengers to turn the bus around to drive to Precious house and save her. After a hot debate and an engine failure, the gang from the bus finally reach the house and overpowers the abusive husband.

The entire audience in the cinema cheer and laugh in relief. The scene is from the film ‘Lsk Heroes’, a movie produced by Zambian Muvi TV.

It is the red carpet-premiere at “Levy Junction”, a temple of mammon, built out of concrete and steel in the middle of town, catering to the growing Zambian upper- and middleclass. The film team is here, the in-crowd and one or two politicians.
“We have lost lives in this country. Each of us has a responsibility to intervene when we see such things”, says Henry Joe Sakala, director of the film. 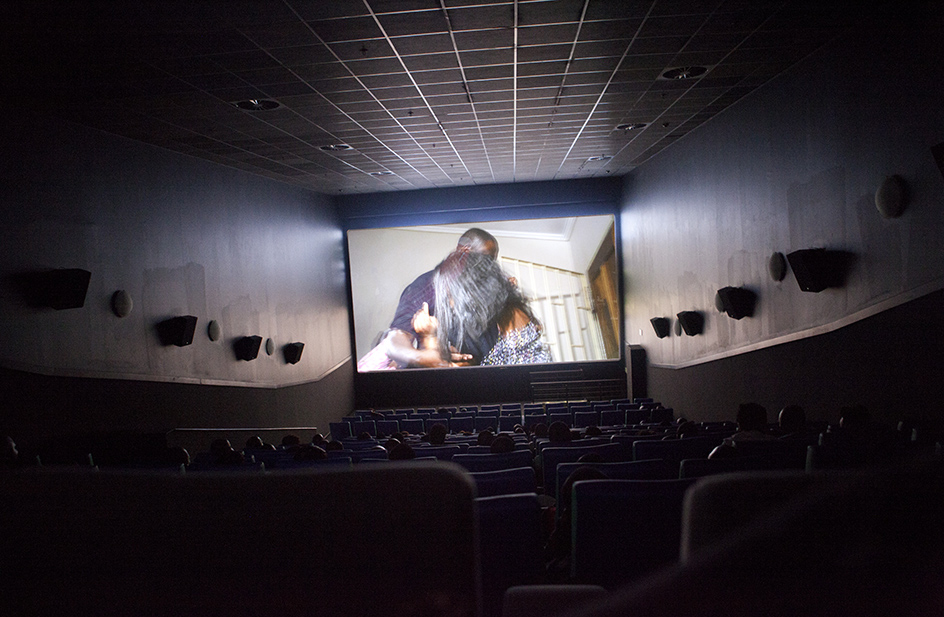 The Premiere Gala is broadcast live on TV. On the red carpet, Chibesa Ngwira shines in a red dress as she interviews the crowd about the film and its message. She looks different at the office the next day. No wig, no makeup, no red nails. She is a celebrity in Zambia. Muvi TV, where she works as a presenter, has great impact in the country, especially in the urban areas.

“When something happens in the suburbs, people call us before they call the police”, says Chibesa Ngwira.

The show she presents is called ‘Spit It Out’, a debate program with four traditional advisors on the panel. Two women, two men. Viewers from all over the country submit their problems via phone or SMS, the four in the studio discuss the issue, and advise on solutions. Very often the callers are women and children telling tales of violence and abuse.

“If there is serious abuse, we ask them to contact the editors of the show who will then put them in contact with an adviser. If we tell them to go to the police right away, we lose them.”

‘Spit it out’ has been a great success for the channel. Traditionally, Zambian women live in a culture of silence.

¨What happens at home stays at home. Through the program, they get a voice and can ask for advice and help without having to reveal their identity”, says Chibesa Ngwira.

Inspector Tresford Kasale shares a small and crowded office at police headquarters in Lusaka with five other members of the victim support unit, responsible for gender-based crime. They are the carriers of the new legislation.

He sits behind piles of documents and talks about the obstacles they face. The silence and financial dependency of the victims are major problems, but not the only ones. The state’s lack of resources is another. In some districts, the police do not have a single vehicle and there is, for example, no forensic laboratory in the country.

“Many cases have already been dismissed by the time vital evidence comes back from South Africa,” he says. 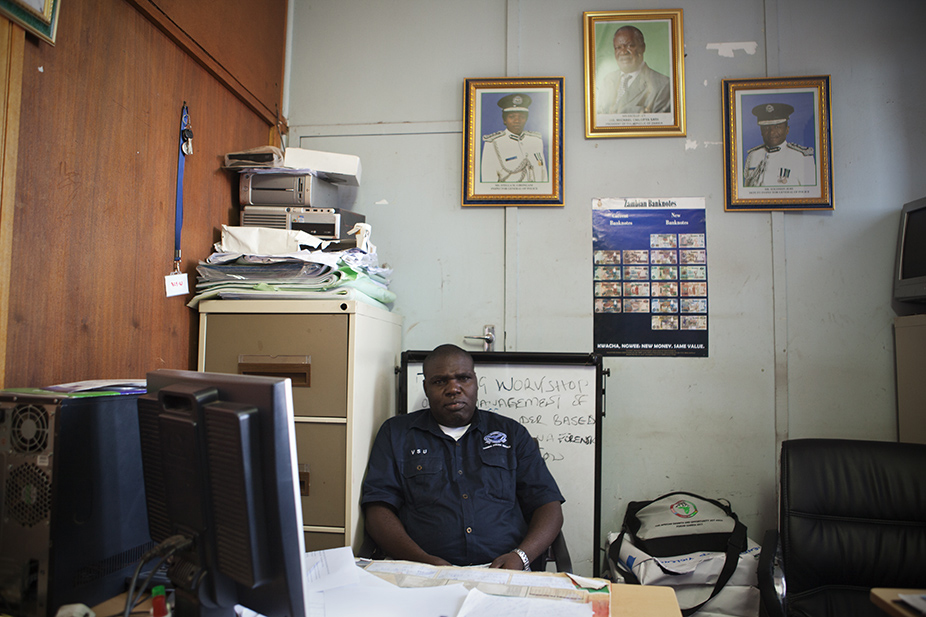 The unit has 439 police officers spread across the country, 231 of these are women, according to Tresford Kasale. Many of the employees are trained in counselling and law, and everyone is particularly knowledgeable in gender issues. One of their biggest tasks outside of the police work is to spread knowledge and demonstrate their presence. They do this by visiting schools and remote areas, through radio and television and through large poster campaigns. Tresford Kasale says it’s moving forward, slowly. That their work, and the efforts of government and other organizations, yield results.

“Nowadays it even happens that several people report the same case of abuse, especially if there are children involved,” he says.

The violence statistics in Zambia are currently climbing upwards instead of downwards. Fortunately, most people seem convinced that it is not the violence that is increasing but rather the publics inclination to report violence.

Maureen Lubasi worked as a truck driver for almost 30 years. Nowadays she is Lusaka’s only female public minibus driver. Her bus is idling at the bus stop outside Arcade’s shopping centre, waiting for passengers. It’s cold and the rain smatters against the windowpanes, even though the rain season should have been over months ago.

Maureen Lubasi doesn’t think her passengers would have asked her to turn the bus around to save an abused woman. According to her, the collective sense of responsibility has been erased in Zambia in recent years, as the socioeconomic gaps have widened and individualism has become the new ideology. But her passengers do not agree. They all say they would intervene if they suspected violence or abuse today.

“Now that we have this law, the police should be informed,” says Nancy Mobita, a student at Lusaka University.

“Five years ago, violence was a private matter, it isn´t anymore.”

This story was published in the Swedish magazine Re:Public (paper and online) in May 2014. This is a translation.